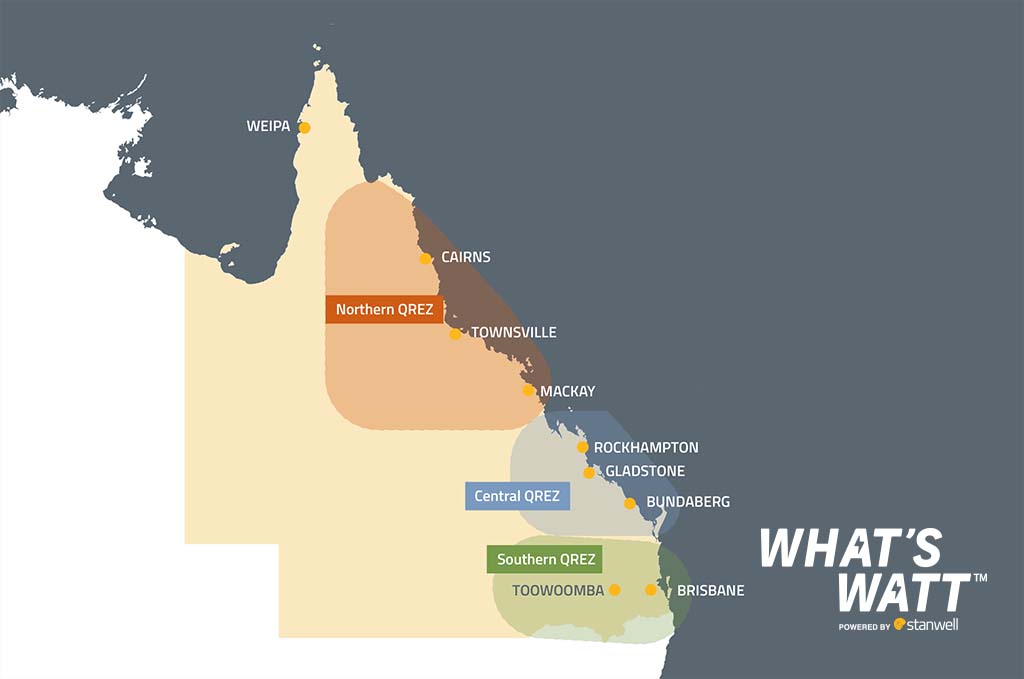 The Queensland Government has committed $145 million to establishing three Queensland Renewable Energy Zones (QREZ). Here’s what you need to know about what they are, where they are, and how they will aid the evolution of Queensland’s energy system.

What is a Renewable Energy Zone?

Renewable energy sources like wind and solar are making up an increasingly large proportion of generation in the National Electricity Market (NEM). However, much of this new generation is scattered throughout sunny and windy areas of the grid, where transmission network capacity has already been taken up by existing renewable generators connected to the network. Powerlink Queensland owns and operates the transmission network across Queensland and has already delivered a significant number of new large-scale renewable connections to the grid.

A REZ connects multiple renewable energy generators and energy storage technologies in the same location, and pairs them with high-voltage poles and wires. This way, renewable energy can reliably and efficiently reach the homes and businesses that need it, when they need it, with minimal transmission loss.

REZs will be located in locations with high quality renewable resources, as well as suitable topography and available land to support the development of multiple generators in a coordinated way, while ensuring genuine and lasting benefits for host communities.

How will Queenslanders benefit from Renewable Energy Zones?

The Queensland Government has set a target of 50 per cent renewable energy by 2030. More than 20 per cent of Queensland’s electricity is already supplied by renewable energy sources, but for this target to be achieved without compromising the grid’s ability to deliver affordable, reliable and secure energy, network upgrades will be required.

The establishment of the three QREZs is also expected to foster jobs and growth in Queensland’s regional economies, both directly and indirectly, as local businesses are called upon to support the initial construction phase and ongoing project needs.

Where are the Queensland Renewable Energy Zones located?

The Northern, Central and Southern QREZs cover areas identified by AEMO as having good quality renewable resources, as well as other characteristics suitable for renewable energy development.

The Northern QREZ spans from Far North Queensland down to Mackay, and as far west as Barcaldine.

Far North Queensland has some of the strongest wind and solar resources in Australia. Better yet, wind is often blowing at night when solar farms aren’t generating power, which helps to level out energy production.

At the moment however, there’s limited capacity to support the connection of new renewable projects in the area to the grid. That’s why $40 million has been committed by the Queensland Government towards upgrading the transmission network between Cairns and Townsville, unlocking up to 500 megawatts (MW) of renewable energy potential. This will involve upgrading over 300 kilometres of existing transmission lines from 132 kilovolts (kV) to 275 kV.

As well as allowing more renewable generators to connect to the grid, strengthening the region’s transmission network will also make it more resilient to cyclones, storms and lightning strikes.

Early work on the transmission upgrades commenced in May 2021, with large-scale energy generation and storage projects – including a 157 MW wind farm and 250 MW pumped hydro project – set to connect to the Northern QREZ by 2025.

Considered the energy powerhouse of Queensland, the Central QREZ is located in a part of the network that’s currently home to significant traditional generation assets, as well as some of Queensland’s largest energy consumers and most energy-intensive industries.

The Central QREZ has already received registrations of interest from more than 60 projects, representing more than 23,000 MW of generation capacity across solar, wind, bioenergy and storage technologies. If developed, these projects could result in more than $39 billion in investment in the region, and thousands of construction jobs.

Hydrogen presents an exciting opportunity for the region. In June 2021, publicly-owned generator Stanwell announced it had secured land for a proposed 3,000 MW green hydrogen electrolysis facility at Aldoga, 20 kilometres west of Gladstone, with a view to producing green hydrogen for export to Japan and for use in local Gladstone industries. In September 2021, Stanwell secured international confidence in the project, with the announcement that a consortium of six businesses from across the hydrogen supply chain were officially backing the project.

The proposed facility’s proximity to the Central QREZ will provide access to the renewable energy sources required to power the plant, which would become the largest green hydrogen project in Queensland. Over its 30-year life, the plant is expected to provide over 5,000 new jobs and $4.2 billion in hydrogen exports, and inject $10 billion into Queensland’s Gross State Product.

Home to a diverse mix of industries, large domestic load and energy sources, and in close proximity to the cross border interconnector linking Queensland’s state grid to New South Wales, the Southern QREZ already has a strong pipeline of prospective projects with high investor interest – which would only be strengthened by unlocking additional capacity in the region.

The Darling Downs region is particularly known for its farming industry. Injecting more renewable energy into the grid in southern Queensland would help the agribusiness sector to slash emissions and reduce energy costs. The Queensland Government has also identified the transport sector – especially the region’s freight network – as one that would benefit from utilising more clean energy.

While much of the renewable investment in the region to date has been in solar generation, it also has good wind resources, and is home to the state’s largest operating wind farm. More than 70 projects, including a combined 8,300 MW of wind capacity, have already registered their interest in the Southern QREZ, representing over $30 billion in potential investment.

While work on the Northern QREZ has already begun, the Government is continuing to engage with stakeholders on the long-term development of these zones, with a focus on ensuring that they deliver real benefits and a lasting legacy of opportunity for local communities.

Consultation with communities, industries and other stakeholders will continue throughout 2021 and beyond, to make certain that the full potential of the Northern, Central and Southern QREZs is maximised, that genuine benefits are realised by local communities, and the stability of Queensland’s energy grid is secured – now, and into the future. You can find out about the latest consultation activities and register for updates at www.qld.gov.au/renewable-energy-zones

Stanwell, Queensland’s largest energy generator, has a pipeline of renewable energy projects in progress which align with the Central and Southern QREZs. Stanwell’s intention is to use the areas surrounding its existing Tarong and Stanwell power stations, as ‘energy hubs’ within each zone.

These hubs will form the basis for continuing operations of our existing generation portfolio and will be the areas around which the company’s future energy assets and interests will be predominantly created.