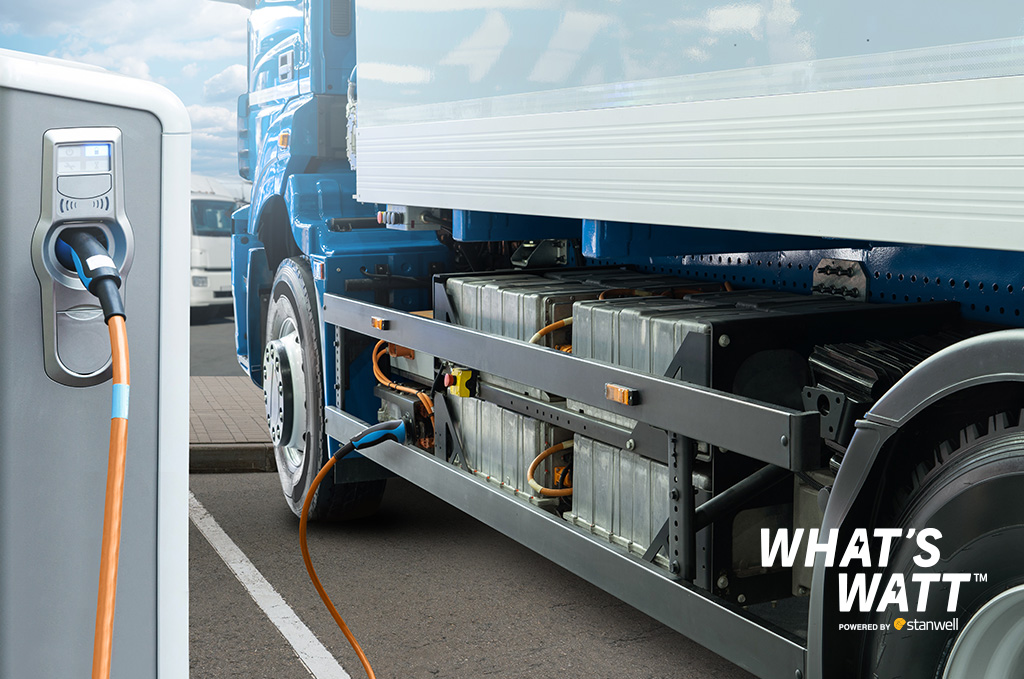 As electric cars become increasingly commonplace, attention is turning to the other forms of transport that can be electrified – including trucks, trains and buses.

As lithium-ion batteries come down in price and the distance that electric vehicles (EVs) can travel on a single charge increases, the benefits of owning an electric vehicle are becoming clearer.

But it’s not just motorists that are learning to love EVs – the transport industry is taking notice, too.

The transport sector, including emissions from transportation by road, rail, domestic aviation and domestic shipping, accounts for 18.3 per cent of Australia’s greenhouse gas emissions, according to the most recent National Greenhouse Gas Inventory.

Emissions from the transport sector can be reduced through electrification – and efforts are already well underway to ensure that happens.

Heavy-duty electric trucks that can travel short distances are already becoming a more frequent sight on our roads, but longer trips are proving to be a challenge.

Founded in Australia and now based in Los Angeles, SEA Electric manufactures electric trucks that are currently ferrying last mile deliveries – the final leg of the shipping process – for the likes of Woolworths, IKEA, Australia Post and DHL. Their trucks can also be fitted out for tasks like garbage collection, refrigerated transport and carrying passengers.

The SEA Electric trucks used by IKEA average about 200 kilometres per day, and come back to base each night to be charged. The trucks cost IKEA about $12 per day to operate, and the company claims that while electric trucks cost about three times as much to purchase as their diesel-powered equivalents, the extra costs can be recouped within five years through savings on fuel and maintenance costs.

But it’s easier for trucks that only need to travel relatively short distances to be electrified, because they don’t need the bigger batteries and ultra-fast public charging infrastructure that trucks travelling long distances would require.

Essentially, the challenge for the industry is that diesel trucks can travel for thousands of kilometres without needing to refuel – and if they were to go electric, the costs of long stops to charge their batteries would outweigh the savings their operators could make by switching to a cheaper energy source.

In 2021, Australian company Janus Electric began conducting trials of swappable batteries for electric trucks. The company claims the batteries can be swapped in three minutes and average between 400 to 600 kilometres per charge, but converting trucks to run on the swappable batteries would cost approximately $85,000 per vehicle.

In 2019, global transport giant Siemens trialled an on-road charging system on a 10 kilometre stretch of Germany’s Autobahn. The system involved cables being stretched over a highway lane, with trucks powered by both electric batteries and diesel engines running underneath the cable much like a rail or tram line. When the cable ran out, the trucks switched back to diesel and carried on as normal.

But the Siemens project is far from being implemented on a large scale, and would most likely be ill-suited to the long and sparsely-populated highways that trucks travelling vast distances are required to drive on in Australia.

The Australian Trucking Association (ATA) and Electric Vehicle Council (EVC) recently collaborated on a report that made the case for an industry-wide switch to electric vehicles, highlighting that 38 per cent of Australia’s total transport emissions come from the road freight sector.

On top of the reductions in emissions and fuel and maintenance costs that would come with electrification, the report emphasised that the reduced vehicle noise of an electrified fleet would improve working conditions for drivers, and could allow trucks to be used outside of current urban curfew limits, allowing flexibility in hours of operation and reducing traffic congestion.

However, the report also highlighted the barriers to EV uptake in the trucking industry, including the up-front costs; limited model availability (only 14 of the 58 electric truck models available in North America, Europe and China are available in Australia); and the lack of public fast-charging infrastructure.

In 2020, California mandated that the majority of heavy-duty trucks sold by 2035 would be zero-emission, and began subsidising the cost of purchasing new electric vehicles. About half of all the electric trucks on US and Canadian roads are now based in California.

Many Australian railways have already been electrified for generations. These electric trains have been powered by overhead lines, third rails (conductors placed alongside or between the rails of a track), batteries and supercapacitors, although there continue to be barriers to electrifying freight rail routes.

Melbourne and Sydney’s suburban railway lines were the first to be electrified (in 1919 and 1926, respectively). Throughout the 1970s and ‘80s, an extensive rail electrification program was carried out in Queensland that left the state with the largest electrified network in Australia, encompassing over 2,000 kilometres of track.

Not only are all of the suburban passenger services in the Brisbane metropolitan area and South East Queensland operated using electric trains, but there are also electric tilt train services running as far as Rockhampton in Central Queensland on the North Coast Line. Australian rail operator Aurizon also uses an extensive network of electrified freight lines to service the Central Queensland coalfields, although diesel is still used to power freight trains throughout the rest of Queensland.

CSIRO’s Electric Vehicle Projections 2021 report noted the main barriers to electrifying freight rail are the cost of providing electricity supply along freight rail routes, some of which are remotely located, and the sunk cost of existing diesel engines. For these reasons, CSIRO projects electrification of these routes will require further technological advancements.

In December 2021, however, the Queensland Government announced that it would continue to explore renewable energy opportunities for freight rail, through a feasibility study with Aurizon and Anglo American into using hydrogen-powered trains for bulk freight.

Hydrogen fuel cells, which can be powered by hydrogen produced from water using renewable energy, offer an alternative method to electric batteries for powering heavy transport like buses, trucks, trains and aircraft. You can learn more about renewable hydrogen and its applications here.

Australia’s adoption of electric buses has come a long way in a short period of time. As recently as 2018, 99 per cent of all the electric buses in service worldwide were based in China, but electric buses are now rolling out onto roads around the country, providing passengers with cleaner and quieter transport.

Like electric trucks, electric buses come with a higher upfront cost than their traditional counterparts, but this can be recouped through savings on fuel and maintenance.

In August 2021, the Queensland Government announced plans to build 16 new electric buses on the Gold Coast, and create the state’s first 100 per cent electric bus depot in North Lakes. The buses, which will be powered by 100 per cent renewable energy and produce zero emissions, are expected to be ready for service by late 2023. By 2025, every new urban bus added to the fleet in South East Queensland is expected to be a zero-emissions bus, with the rest of the state’s urban fleet expected to follow suit by 2030.

The announcement followed the July addition of four electric buses to run the City Loop service in Brisbane. Brisbane is also expected to add a fleet of 60 electric Brisbane Metro vehicles in 2024, pending the successful trial of the pilot vehicle in 2022. The Brisbane Metro vehicles are 24.4 metres long – closer to a train carriage than an articulated bus – but will share the busway with existing bus services. They feature a flash charging infrastructure capable of charging each vehicle in under six minutes at fast-charging stations located at end-of-trip points.

In Sydney, a new pilot program – the largest of its kind in Australia – has seen 40 diesel buses transition to electric buses. The buses will be based out of a depot in Leichhardt that has been retrofitted with 36 chargers, including five 120kW chargers capable of charging two buses at a time.

Our energy system is evolving – and as a result, so are our roads, as we drive towards a renewable future.