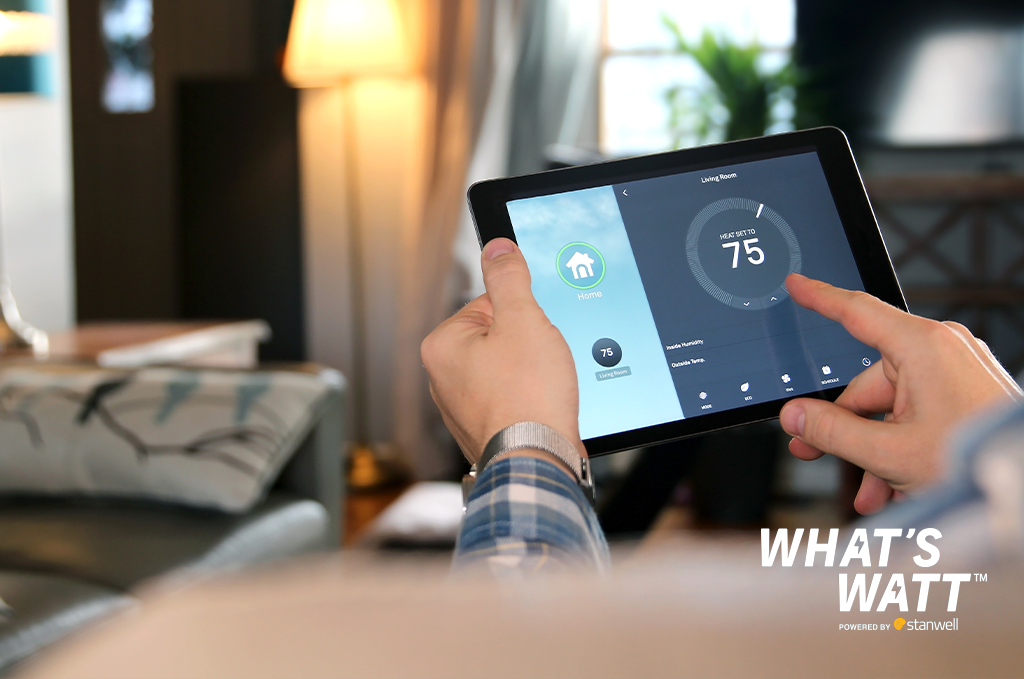 ‘Net zero’ is on the tip of the world’s lips, but you don’t need to run a government to start making changes that will help reduce global carbon dioxide emissions to net zero by 2050. Here’s how you can do your part for the environment today – and save money in the long run.

Given that 100 companies were responsible for 71 per cent of global greenhouse gas emissions between 1988 and 2015, you might ask yourself how much difference one household can really make. But with the UN setting a target of two tonnes of carbon emissions per person per year, and the average Australian household currently emitting 15 to 20 tonnes of carbon annually, it’s clear that all of us will need to make changes.

Electricity accounts for about 86 per cent of Australia’s residential greenhouse gas emissions – we use it for everything from heating and cooling to washing, drying and entertainment. But the good news is that average energy use per household has fallen over the past two decades, as more efficient appliances have become available.

And there’s a growing movement towards net zero homes – homes that produce at least as much energy as they consume, and take zero net energy from the electricity grid.

Developments like these are expected to become increasingly commonplace, with proposed changes to the National Construction Code set to increase the minimum NatHERS rating for newly built homes from six stars to seven stars from 2022.

A 2019 study by the Cooperative Research Centre for Low Carbon Living found that upgrading typical display home designs to a net zero standard added between six and 11 per cent to construction costs, but reduced annual energy costs by around 88 per cent – or $1,750 – each year, with only a small three to four kilowatt solar system required.

The Clean Energy Finance Corporation – through Bank Australia and Firstmac – is also financing home loans with a 0.4 percentage point discount for builders and home buyers on homes that achieve a minimum seven-star NatHERS rating.

But what about the home you’re already living in? While retrofitting a net zero home is more challenging than building one from scratch, there are some simple steps you can take to improve the sustainability of your place – and save money on your energy bills.

A net zero home is about much more than just putting solar panels on your roof – it’s about minimising energy demand in the first place, and then using renewable energy sources to meet your remaining energy needs.

When it comes to minimising energy demand, insulation is normally the place to start. Australian homes tend to be very ‘leaky’ – most were built before the introduction of energy performance standards in 2005, so they allow thermal energy loss through poorly insulated walls, roofs and floors. (The Climate Council has slammed most Australian homes as “glorified tents” for this reason.)

This leaves residents needing to artificially heat and cool their homes to stay comfortable. In fact, heating and cooling accounts for around 40 percent of household energy use in Australia.

You can have a NatHERS assessment undertaken for your home, which involves an experienced assessor suggesting ways to improve the thermal performance of your home and make energy upgrades.

But if you want to get started now, sealing up gaps and cracks around your home will help to make an instant improvement. It’s also a good idea to keep windows shaded with awnings or blinds. You can also investigate insulating your walls, ceilings and floors, and double glazing your windows (or applying window film, which isn’t quite the same thing, but is less expensive).

Get the most out of your appliances

You don’t need to rush out and replace all your household appliances at once, but when they reach the end of their natural lifespans, make sure you purchase energy-efficient replacements. Most appliances are required to carry an energy rating label which tells you how efficient it is compared to others of its type. The more stars it has, the more efficient it is.

Don’t be fooled by the ticket price – while less efficient appliances might be cheaper on the retail floor, you can use the Energy Rating Calculator to compare the total cost of an appliance, including the running costs over its lifetime.

Stand-by power makes up six per cent of the average home’s electricity use, so it’s always a good idea to switch appliances off at the power point when you’re not using them (except for fridges and freezers, of course). You can use power boards to turn several devices off at the same time, to save you the effort of doing it for each item individually.

Most air-conditioning units sold today are reverse cycle, which means they’re able to heat as well as cool – and in fact, they’re much more efficient for that purpose than a gas heater. (According to one report, using a reverse cycle air conditioner instead of a gas heater can reduce your energy costs by 45 per cent.)

Keep in mind, too, that every degree of heating in winter or cooling in summer increases your energy consumption by up to 10 per cent. The ideal setting for the thermostat is 18 to 20 degrees in winter, and 25 to 27 degrees in summer.

To minimise your use of the air conditioner, you can open windows at night and on cooler days in summer, and close doors and draw curtains at night in winter; only heat and cool the rooms you’re actually using, and close doors to other areas; and don’t leave the air-con running when you’re out. If you’re worried the house will be an uncomfortable temperature when you get home, set a timer to turn your system on shortly before you get back.

If you have room, another great way to regulate your temperature is to plant a tree – nature’s air conditioner – in a strategic location, particularly in front of windows on the western side of your house. (As the proverb goes, the best time to plant a tree was 20 years ago, but the second best time is now.)

A well-positioned tree reduces the need for air conditioning by shading windows and walls and absorbing sunlight, minimising the heat your house absorbs during the day. If there are enough of them around a neighbourhood, they can negate the heat island effect that leads to increased temperatures in urban areas.

Better yet, trees act as natural carbon sinks, sequestering CO2 by absorbing it from the air and storing it in their leaves, trunks and roots for decades. The amount of carbon will vary greatly depending on the type, size and condition of the tree, but a single tree can absorb as much as 22 kilograms of carbon a year, while also filtering other pollutants like nitrous oxides, sulphur dioxide, carbon monoxide and nitrogen dioxide, and adding enough oxygen to the atmosphere to support between two and four people a year.

Fridges and freezers make up about eight per cent of the average household’s energy use, so if you have a second fridge that you don’t really need, now would be a great time to switch it off (especially because extra fridges are usually older, less energy-efficient models).

Check for leaky seals on your fridge door, which can reduce performance and increase running costs. If the door seal is in good condition, it should hold a piece of paper firmly in place when it’s shut.

The ideal setting for the fridge thermostat is between three and four degrees, while the freezer should be set between -15 and -18 degrees. Every degree lower requires five per cent more energy to run.

Let hot food cool down before you put it in the fridge, and avoid putting the fridge next to an oven if you can help it – the harder a fridge needs to work to stay cool, the more energy it’ll consume.

Only use appliances when needed – wait until you have a full load to run dishwashers and washing machines, and only use the clothes dryer when you can’t take advantage of Australia’s abundant sunshine and humidity by drying your clothes in the open air.

You can also take advantage of any eco-settings on your washing machine to cut down on power consumption, and save the energy used to heat water by taking shorter showers and replacing showerheads with more water-efficient models.

If you have a pool, reducing its temperature by just one degree can save 10 to 30 per cent of your energy costs. If you have solar panels, run your pump when the sun is shining, so you don’t need to use power from the electricity grid.

Lighting consumes around seven per cent of the average household’s energy use. That’s because, while each individual lightbulb doesn’t consume a large amount of electricity, the average home contains 37 of them.

Halogen bulbs should be replaced with LED bulbs. While halogen bulbs are usually cheaper, LED bulbs use around 80 per cent less electricity to produce the same amount of light, and last five to 10 times longer. (LED bulbs also last more than twice as long as CFL bulbs.)

If you can’t replace all your bulbs straight away, concentrate on the areas of your house where lights are on most often – usually kitchens and lounge rooms – to take advantage of the largest savings.

Allowing natural light to enter your house in lieu of switching a light on can be a good way to reduce energy use, as long as the sunlight doesn’t increase your need for artificial cooling.

Once you’ve increased the efficiency of your home and reduced the amount of energy you use, you can turn your attention to installing a renewable energy source. (The value of reducing your energy usage first is that you can install a smaller and less expensive system.)

According to the Clean Energy Regulator, one in four Australian households now have solar panels on their roof – the highest uptake of household solar in the world. Other renewable systems include solar hot water systems, air source heat pumps, and even wind turbines, though these are not commonly used for residential purposes.

You can learn more about what you need to consider when installing solar panels – including your eligibility for solar rebates, and whether or not you should buy a battery – here.

If you want to switch to renewables but you can’t buy your own system – if you’re renting, for instance, or if you’re living in a heritage-listed property that can’t be altered – you can purchase accredited GreenPower from most energy retailers.

GreenPower is a government accreditation program that enables your energy retailer to purchase energy from renewable generators on your behalf. You can purchase as little as 10 per cent, or as much as 100 per cent, of your energy this way. You can learn more about GreenPower, and other ways of offsetting your energy usage, here.

And when it comes time to sell, your effort won’t have been for nothing. Research has shown that properties with sustainable features such as solar panels tend to sell faster, and for higher prices, than homes without eco-friendly appeal.