How does solar energy work? 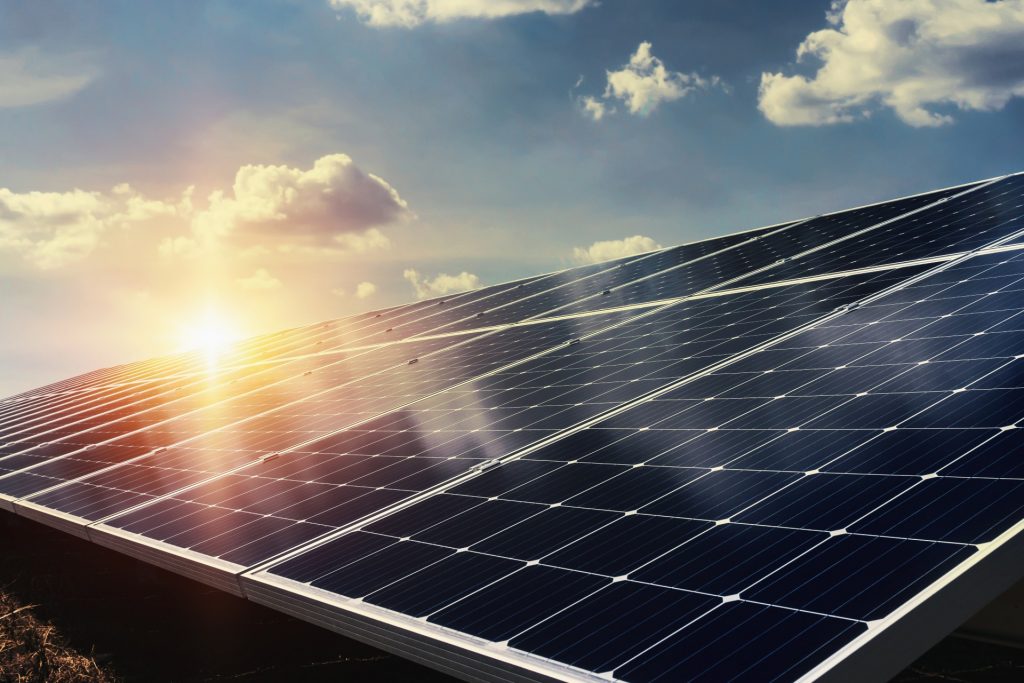 Every hour, the sun generates enough energy to theoretically power the globe for a year – but there’s an art to capturing that energy and turning it into usable electricity.

The sun is, essentially, a giant (and natural) nuclear reactor. The heart of the sun emits photons, tiny energy particles that are even smaller than atoms. It takes about eight minutes for these weightless photons to travel 150 million kilometres to earth in the form of sunlight – and that’s when the process of capturing solar energy begins.

How do solar panels turn sunlight into electricity?

When the photons in sunlight hit the solar panels on your roof, electricity is produced via the photovoltaic effect. ‘Photovoltaic’ comes from the Greek phos, meaning ‘light’, and the volt, the unit of electromotive force named after Italian physicist Alessandro Volta – it’s a bit of a mouthful, so photovoltaic is commonly shortened to PV.

Solar PV panels are made up of many solar cells, each made of silicon. Conductors are attached to the positive and negative sides of these cells, forming an electrical circuit. When the sun’s photons hit the solar cells, subatomic particles known as electrons are knocked loose. These electrons flow through the circuit in one direction, generating an electrical current.

Commercial solar farms work in much the same way that rooftop solar systems do – just on a much larger scale, with many solar panels coming together to form large arrays. For the purposes of the Clean Energy Regulator’s Renewable Energy Target scheme, a solar panel system with a capacity of more than 100 kilowatts and a total annual output of more than 250 megawatts is classified as a ‘large-scale’ renewable energy project.

What does a solar inverter do?

Solar inverters can also provide protection from ground faults (electrical failures that occur when power conductors make contact with the earth), and generate reports on your solar system’s performance – for instance, it can tell you how much power your solar panels have produced that day, or since they were installed.

The converted AC electricity flows from your solar inverter to your electric switchboard, where it can then be used to power your home or business. Your switchboard will ensure that the solar energy generated by your panels is used first, with additional energy from the electricity grid used only as required.

What is solar thermal energy?

Solar panels aren’t the only way to harness the power of the sun. Solar thermal energy works by bouncing light off an array of reflective panels, and concentrating that light at a central point to generate heat – in effect, it’s like using a magnifying glass to start a fire, but for a more benevolent purpose.

The heat generated by the reflective panels is then used to rapidly increase the temperature of liquid, in order to produce super-heated steam. This steam is then used to power a turbine, which generates electricity.

At present, Australia only has one large-scale solar thermal plant – a 9.3 megawatt facility that is used to pre-heat feedwater for the Liddell coal-fired power plant in New South Wales.

What happens to unused solar energy?

Any unused electricity that your solar panels generate is sent to the electricity grid. All households with solar are required to have a bi-directional utility meter, which records both how much solar energy you export to the grid, and how much power you draw from the grid to your house. Sending solar power to the grid will earn you a credit on your bill, called a feed-in tariff (FiT).

According to the Clean Energy Regulator, 29 per cent of suitable dwellings in Australia now have a rooftop solar system, with installations for the June 2020 quarter increasing by 41 per cent on the same period last year.

Rooftop solar reduces demand on the National Electricity Market during the day when the sun is shining, while at the same time increasing supply, because of the surplus energy being fed into the grid.

However, storing solar energy is still quite costly. Solar batteries such as Tesla’s Powerwall are making it possible to take the power generated by a solar inverter and store it for later use, but until there is widespread adoption of this technology, demand for electricity from traditional grid operators will continue to ramp up in the morning and early evening – the times of day when photons aren’t hitting solar panels, but there’s still considerable demand for electricity from consumers.

While the demand for energy from traditional sources is decreasing as a result of the transition towards weather-dependent solar and wind generation, these fluctuations ensure that there will still be a need for the baseload power and grid stability provided by traditional coal-fired generators for the foreseeable future.